Arguably the two biggest differences between chimpanzees and bonobos are (excuse my sweeping statements) that chimps kill each other and are gifted tool users while bonobos don't really do either. Both of these abilities have been the subject of impressive papers lately, so I'm going to dedicate a couple of blog posts to examining them.

The first of these papers is an incredible collaborative effort that brings together data from 18 chimp and 4 bonobo communities - an immense and impressive achievement - in order to examine the drivers behind lethal aggression. I'm going to reiterate again how cool this is, because only looking at one or two fieldsites wouldn't be enough to understand this rare behaviour.

A quick look at the raw numbers of killings bring some interesting things to light: 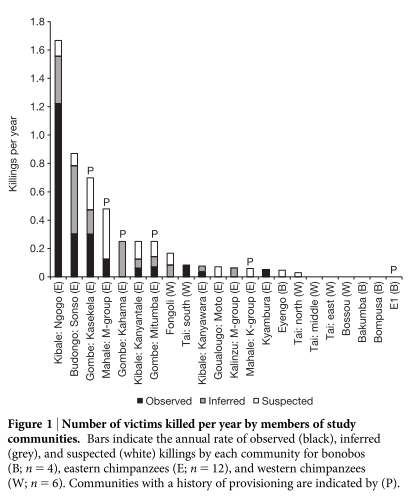 First, as expected by their reputation, there are almost no killings by bonobos bar a suspected case at Lomako. But second, Western chimpanzees don't kill at a significantly higher rate than bonobos. All chimpanzees combined do - but separated into clades, there's no difference between the Western chimps and bonobos. Not all chimps kill at the same rates.

Why kill at all? For a while, it seemed desirable to think that this wasn't "normal" chimp behaviour, it was a result of increased human disturbance that drove chimps into an unnatural state of competition and aggression. This paper puts that hypothesis to the test.

As it turned out, human disturbance (modeled with 3 factors: provisioning, size of protected area, and disturbance rating) was not predictive of kill rates for chimpanzees and bonobos. Indeed, check out this chart: 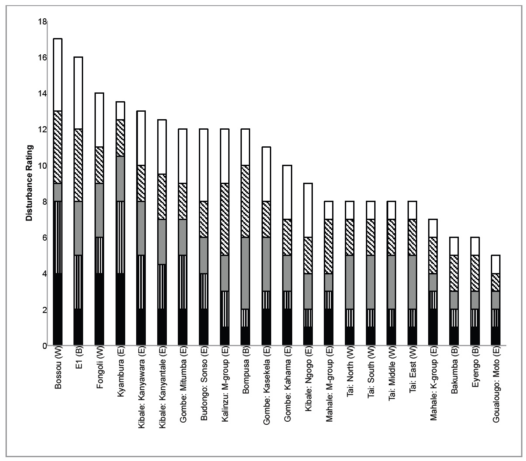 See that second highest bar? That's Wamba! One of the highest disturbance ratings AND they were provisioned (given sugar cane when they were first habituated), but no killings. But they are bonobos, after all. What about those war-mongering chimps?

To test whether killing is an adaptive strategy, they analysed another 3 factors: clade (Eastern vs. Western), number of adult males, and population density. The best-fit model showed that the more males were in a group and the higher the density, the more killings: 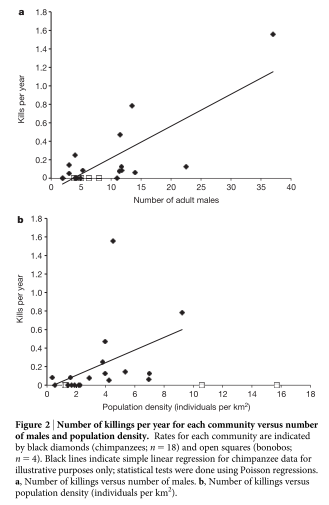 I'm sorry if so far I've given the impression that killings are common or that they are random. Look back at that first graph and check the y-axis. The highest kill rates are 1.6 per year. Just think about how low that is for a minute. Chimps are not blood thirsty killing machines. This isn't Planet of the Apes. Now that I've made that clear, let's look at the patterns of who kills who.

The majority of these killings happen between members of different groups (63%). Now consider that chimps might spend 1.9% of their time encountering members of different groups. Chimps spend a lot of time NOT killing their own kin. Most killings were also carried out by males (92% of attackers) and the majority of victims were male. Usually the males outnumbered the other individual (mean ratio of 8:1). When females were involved they either participated in a mixed group or, if there were only female participants, would only kill infants. This illustrates how chimpanzee killing is largely directed to other groups, when a large party meets a lone individual. As the authors said, "The most important predictors of violence were thus variables related to adaptive strategies: species; age–sex class of attackers and victims; community membership; numerical asymmetries; and demography."

When bonobo data was included, it changed the distribution to such a degree, that this model is likely not representative of bonobo behaviour. The take home messages: (1) bonobos and chimps are still different in terms of lethal aggression, and (2) it seems that chimp killings follow an adaptive strategy rather than being the result of human disturbance. My take home message: if you can compare across a large number of long term study sites, you can understand behaviour in a way that would otherwise be impossible!