While we're not yet fully certain as to why bonobos and chimpanzees use tools differently, there have been some very neat findings recently about how chimps use tools.

Wild chimps can learn to use new tools.

If you don't find this exciting, first consider that we are able to track social learning in captivity because we can teach a chimp a new tool use behaviour and see whether and how other chimps can learn it from them. In the wild, how can you tell who learned what from whom? It's almost impossible!

Except, as in Cat Hobaiter's new paper, if you're in the right place at the right time. At a newly formed watering hole she witnessed the innovation of a new sponging behaviour using moss instead of leaves, used by the chimps for drinking water. This behaviour occurred over a weeklong period and diligent data collection allowed her to track who started using tools when.

Now for some statistics. Social Network Analysis is a way of telling who knows each other, who interacts etc. It's commonly used in business, epidemiology, social psychology, and such fields. It can also be a helpful tool when studying biology.

This study used a new dynamic model of social network analysis. Not only could they tell which chimps interacted with others, they could tell in what time order they interacted. Such a cool technique! It makes it possible to see how a behaviour could be learned from others over time. And that's exactly what happened.

They were able to track from the alpha male, who first innovated the moss sponging behaviour, and traced from there the chimps that acquired the behaviour. Chimps that moss sponged had all seen another chimp moss sponging, with the exception of one alpha female who began moss sponging the next day - after having picked up a sponge discarded by one of the chimps the previous day. 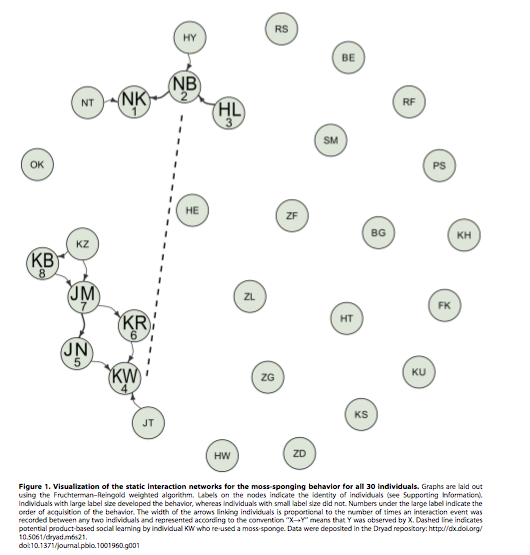 Social learning is invaluable to us, so it's a wonder that we take it for granted. To see chimps in the wild learn new behaviours from others is incredibly exciting. Now that we have seen that they can learn from others, the next step is to see how they learn from others. What forms of learning do they possess?