A lot can happen in 6 months

Wamba was bustling in January, with 6 researchers including myself. I travelled to Wamba with Nahoko, who studies aggressive behaviour. Heungjin, Toda, Aya, and Sakamaki were already there. Heungjin and Toda study female sexual behaviour and immigration, respectively. Aya is an anthropologist, looking at attitudes towards bonobos. Sakamaki is the station manager and seems to study everything! With so many people at camp, dinner was never dull - always bouncing ideas around and gossiping about the bonobos. Because Toda and Heungjin both work with E1 group, in January and February, I worked mainly with P group.

In February, P group frequently encountered with P West and a couple of times with Gori/Olochi group. Group encounters are exciting and frantic. There's so much happening that it can be difficult to follow focal individuals. Thankfully, I can now identify all the P West individuals, so I can keep track in my videos of who's who. It will be fascinating to analyse how individuals communicate between groups. One day, I hope that I can see a group encounter between the two main study groups, E1 and P group. They almost encountered in June, but E1 had split up so they did not continue further into P group's range. Very disappointing. Maybe next time!

In March, we were waiting for Otomi and Nao (adult females in E1 group) to give birth. They were obviously pregnant so we had bets on when their infants would be born. None of us expected that Ichi (in P group) would be the first to give birth. We had no idea she was pregnant! Her son, Isao, was not even 3 years old and wasn't weaned yet. On March 25th, Nahoko and I were both following P group, but separated with different parties. When Isolumbo and I first saw Ichi, we could not believe that she was carrying a new infant. Had she stolen it? we wondered incredulously. We called the infant Isha, and continued to monitor her development closely, happily noting that Ichi was managing to nurse and carry both of her offspring. 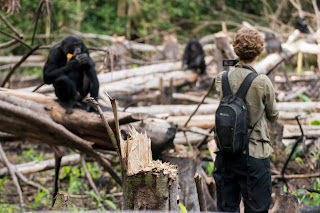 Although the fields are clear for filming, they are adjacent to frustratingly
dense secondary growth forest

April was a month of long walks. E1 group seemed determined that for Heungjin's last month, they would show him their entire range. One day they would have crossed the river 8km away, and the next would be in the fields next to camp. His last observation day was fantastic! E1 group came to the fields and found Bolingo fruit (a large delicious fruit) on their way. Nobita, the strongest male, had a large fruit and a number of juveniles kept begging from him. After feeding, the whole group sat on logs to groom. Incredible for filming!! Ulrich came back from Iyondie forest and we all had a couple of days together before saying "Au revoir". Now it was just Nahoko and me at camp - from six researchers down to two.

In May, I was very happy that I follow both study groups at Wamba. E1 group were impossible! There seems to be a lot of tension in the group, possibly caused by food scarcity in this season. For whatever reason, they kept splitting into smaller and smaller parties. At one point we worked out that they were probably in at least four separate parties, though of course there's no way of knowing for sure. When they range in parties of only three to five adults, it can be difficult to follow them. Combine that with the rainy season, and we lost E1 group quite often. Again, thankfully when E1 were messing around in small parties, I was able to follow P group, who were behaving far more sensibly (well, for my work at least!).

My last month at Wamba was cut short. I have very happy memories from June 11th, which I count as my last real day. E1 group spent ages log grooming. Otomi kept switching partners and eventually settled down to groom Kiku in the most perfect spot for filming. Gorgeous. On June 12th, it had rained during the night, so the bonobos spent most of the morning in their nests before finally coming out to find food. Not a bad day at all.

June 13th: At 08:00 the bonobos entered the swamp. We lost sight of them around 08:30. At 09:00 we finally caught up with them. Etenyi pointed ahead towards my focal individual. While I was looking at Kitaro, none of us had noticed that Shiba was directly overhead. When he moved, a dead branch fell and hit me directly in my right eye. After I collapsed crying on the ground, I heard the bonobos vocalise too. Afterwards, the trackers told Nahoko that when I had wailed in agony, the bonobos had climbed down from the canopy to look at me. It was probably strange for them to hear screaming from a human, when we're normally so quiet. The trackers were awesome. They helped flush my eye out with clean water and helped get me back to camp. We were very deep in the swamp at that point, so Bafike walked ahead clearing a path while Etenyi led me by the arm. I'm still in awe of them. It took three hours for what would normally be an hour and a half long walk.

Within the next week, arrangements were made for me to come home early. They flew me to Nairobi hospital for treatment. It's an amazing hospital. And my prognosis was good - no need for surgery, just time and rest. Now I'm back in Scotland, continuing to rest. My eye continues to improve.

All in all, it was another successful study period at Wamba. Despite leaving a little earlier than planned, I followed bonobos for 105 days, amounting to 597 hours of observation time, and bringing my total video library up to ~4400 video clips. Once my eye gets a little better, then comes my final year: coding, analysis, writing.
Email ThisBlogThis!Share to TwitterShare to FacebookShare to Pinterest