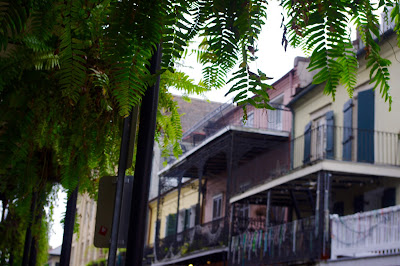 Last week, I attended the Evolang (Evolution of Language) conference in New Orleans. New Orleans is a great city and Tulane University was a nice conference venue. The conference wasn’t too big, so there was plenty of opportunity to meet a wide-range of people, many of them with helpful and encouraging feedback. The talks varied from animal communication to linguistics to philosophy, and here I’ll give a one sentence summary of each talk I attended in the first day and a half. I’ll post more summaries of the other talks later this week.

Kanzi and other apes are dendrophobes (not good with tree-like grammar structures), but actually humans don’t begin life as dendrophiles either.

Fedorenko E. Evolution of the human language system
fMRI studies show that the language network is not active in general cognition tasks or speech-accompanying gestures, and it is likely a system for both storage and computation.

Thompson-Schill, S. Domain-generality and prefrontal cortex
Human development is slower because if children had more cognitive control (which acts like a filter) it would be detrimental to learning, and so this slower development allows for language acquisition.

Janik, V. The evolution of complexity in marine mammal communication
Dolphins have individual signature whistles and seals can learn to produce new vocal calls when trained with playback sounds.

Clay, Z. et al. Functionally flexible vocalizations in wild bonobos (Pan paniscus)
Bonobos use peep calls across a wide range of contexts, contrary to the belief that ape vocalisations are all context specific.

Slocombe, K. et al. Vocal learning in functionally referential chimpanzee food calls
Three years after two chimpanzee groups were combined into one group at Edinburgh zoo, one of the groups adopted the same call for “apples” as the other group even though their food preference didn’t change.

Progovac, L. What kind of grammar did early humans command?
Early humans and Neanderthals may have used a proto-grammar with a 2-slot mould for small clauses, allowing them to put simple words/phrases together.

Bonobos have less response waiting time than chimpanzees and are more likely to overlap their response with the preceding gesture. [I helped to collect this bonobo data as a field assistant]

Kriengwatana, B. et al. A general auditory bias for handling speaker variability in speech?
Zebra finches and humans can discriminate vowels produced by many different human speakers by attending to acoustic differences, but only humans attend to the speaker’s sex.

Lister, C. et al. A developmental perspective on language origin
Children guess the answer correctly, copy their partner’s signs, and their signs resemble the referent more frequently for gestures than for vocal communication.

Abramova, E. Triadic Ontogenetic Ritualization
Triadic communication could be acquired by ritualization (where an effective action eventually turns into gesture) if two individuals are repeatedly performing an action with an object.

Tallerman, M. Against the emergent view of language evolution
Language evolution probably occurred gradually rather than with the “merge” of Expressive and Lexical systems, as proposed by Miyagawa et al.
Email ThisBlogThis!Share to TwitterShare to FacebookShare to Pinterest